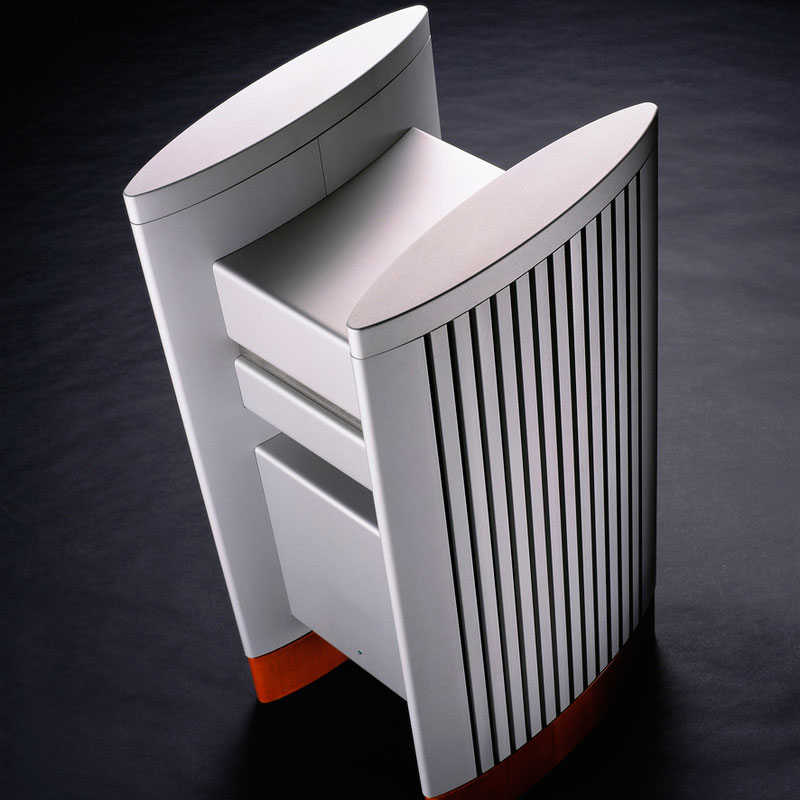 Halcro created a storm when it hit the market back in the late 90’s with what truly was a revolutionary amplifier. The dm58 was a product Australian company Halcro, was damn proud of, and with good reason. With some serious coin invested in marketing, and travelling the Hi-Fi show world circus to show off their creation, it was met with raised eyebrows from many enthusiasts.

A solid state mono-block with unbelievable distortion specs; a 99.9996% pure signal. Perhaps what helped Halcro overcome the opposition of the valve-amplification purists at the time, was the adoption of Halcro amplifiers by many of the world’s leading loudspeaker brands for use at Hi-Fi shows, including Wilson Audio.

Within time Halcro had earnt their stripes; Stereophile stating “Halcro’s dm58:  The Best Amplifier Ever”, among hundreds of awards and ultra-positive reviews that soon followed.

That was then, and some short time later the Halcro company was acquired by another, named ‘Minelab’, a mine and metal detection manufacturer. Halcro production and development continued, but other interested parties perhaps not so “Hi-Fi” enthused now had a say in the direction of the Halcro brand. This led to new products and what was a new direction for the company; the growing home cinema market. A whole new range of multi-channel amplifiers and processors were released, with praise and awards that continued to follow. The world’s best amplifiers they were not, because they simply were not the dm58 or it’s brothers. They still held their own a notch above most however.

Minelab was then acquired by another company, ‘Codan’, specialising in military radio around 2009. This ultimately was the end of the Halcro brand, as Codan were apparently only interested in the synergies between Minelab and it’s own military markets. The offshoot of Halcro audio products were unimportant to Codan. The shareholders of Minelab retained the Halcro intellectual property and tooling, but were unable to operate the business because the key Halcro people were absorbed within Codan.

Which brings us to today. Not everyone gave up on Halcro. One individual in particular, Mike Kirkham, held hope. You may recognise the Kirkham name from Magenta Audio, a specialist AV importer responsible for brands such as PS Audio in Australia, amongst others. Kirkham, together with stakeholders of his company Magenta, teamed up with notable former employees of Halcro including Lance Hewitt, to form ‘Longwood Audio’, an independent entity that will operate independent of Magenta Audio, and oversee the Halcro brand.

“Lance was responsible for much of Halcro’s product development and the actual board designer of their DM series amplifier. Lance knows Halcro inside out and has maintained and serviced Halcro equipment worldwide over the past few years”, Kirkham told StereoNET.

Kirkham was a little shy when asked of who else will be involved in the brand’s design team, but we have been assured there will be a few surprises.

One thing is for sure, and that is that Longwood Audio are passionate about retaining product manufacturing to the same original exacting standards in the Adelaide Hills, South Australia. An Aussie icon that will retain its roots.

While years in negotiation, the successfull deal has resulted in Longwood Audio also purchasing all existing stock from the previous company. A number of the MC series of amplifiers are now available at special pricing (stay tuned to StereoNET for details).

According to Kirkham, “Production is resuming on a small scale initially as we rebuild the brand. We also have enough parts to build DM series amplifiers in small numbers. Expect the DM amplifier to be even better than before, and rest assured our focus will be on two-channel and Hi-Fi”. Exciting stuff indeed.

Suffice to say, HALCRO is back.